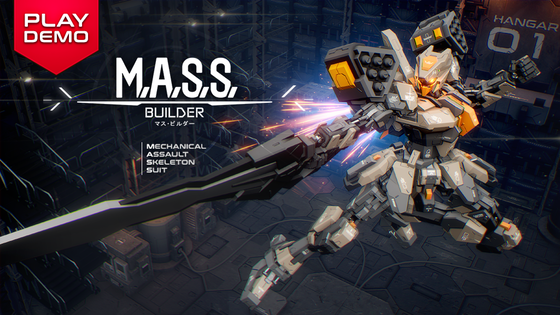 Help fund the development of M.A.S.S. Builder and get some great rewards as well!

Latest Updates from Our Project:

Hello everyone, we're here to announce the date of the upcoming patch 0.3.0 release as well as the patch notes on what you'll be getting to play with. The patch will drop on March 7th. The amount of things we're adding here proved to be much larger than we thought thus it'll be a week later than what we first planned, and we ask for your understanding. Now, what has changed? You can read about them below.

Adjusted the Architecture tree by the following:

Hello everyone! Time for another weekly WIP update, this time looking at the up and coming Shields and Guarding system. We're introducing a new type of equipment, shields, into the game as an off-hand for close-combat weapons. They are customizable and we'll be sure to add more customizations when more content drops.

On shield activation or "guarding", it provides a very hefty damage reduction at the cost of slower movement and fuel recharge, and players can actively guard at any moment they see an attack is coming. We also have added in development nodes that can modify some aspects of guarding. We hope this will provide another depth of fun and complexity to combat.

Hello everyone, on today's weekly updates of how we're progressing, we'd like to show you the up and coming updated development nodes that we have re-adjusted a lot of things like swapping places and buffing less-used nodes.

We have also added into the trees, nodes where you can unlock new and extended combo attacks, dual wielding, and the Quantum Break modes as well as corresponding trees that will allow you all to customize how things work for each of them. There is also a new tree for active shields, as they are coming together with the close combat rework, and we do hope you'll all like it, but if there's anything you'd like to say regarding them, feel free to chime in through the steam discussions or our discord here and we'll read through it accordingly!

Also, here's a sneak peek on the localizations by courtesy of our publisher Sekai Games... as well as improvements in English! We're also looking to get into Chinese and maybe Spanish...?

Hello everyone, today we're showing a new #massbuildergame feature that will be added in the next patch update. This is a new system for close combat only where players will collect charges through close combat attacks, getting a full charge and spending them to enter into Quantum Break mode for a limited amount of time.

It'll boost your status to an extreme amount with four forms to choose from on use, you do not need to set them up and they'll be available through development unlocking so save up your materials and credits in preparation for the update!

Time for another #screenshotsaturday for #massbuildergame. This week, we're showing you new VFX for property damages. It'll also reflect the color of the trails you've customized.

For clarification, HEAT damage will burn your enemies with damage over time, FREEZE damage will lock your enemies in place, and SHOCK damage will increase the damage they take. We will be updating and reworking the tuning architects and techs for them so expect to read more about them on the upcoming patch soon!